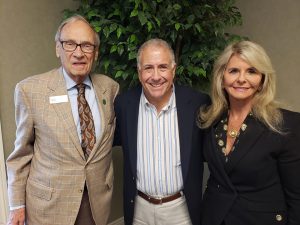 CBS News Radio correspondent and anchor Peter King was the special guest at the Forcht Broadcasting Summer General Managers meeting this past Tuesday, July 9. Peter talked about his upcoming CBS Radio special remembering the Apollo 11 mission and moon landing that happened 50 years ago this July. Peter covers NASA operations and news from the southern U.S. for CBS News Radio. The general managers spent Tuesday hearing about Peter’s time as a news correspondent and some of his great stories about covering the news.

Five Forcht Broadcasting stations are CBS News Radio affiliates. WHOP Hopkinsville, KY 98.7 and 95.3 FM and 1230 AM is the second oldest CBS Radio affiliate in the country – having aired CBS Radio for 76 years in 2019. Thank you, Peter, for traveling to meet with the team. Everyone enjoyed the day.